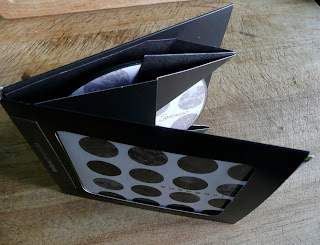 For a scary moment I thought I might be out of my depth here. I mean I’ve read reviews of Tuturgi that were thousands of words long written by people who’d swallowed dictionaries. Then you discover that Otondo is a lecturer at the Lancaster Institute for the Contemporary Arts and is the recipient of several international musical awards, he’s also the author of works such as ‘Contemporary trends in the use of space in electroacoustic music’ and ‘Using spatial sound as an interdisciplinary teaching tool’. Don’t think there’s much chance we’ll see Otondo down the Wharf Chambers any time soon then, but then he has premiered in Leeds.

The four ten minute-ish compositions on Tuturgi are of such depth that I feared my humble playback devices weren’t going to be up to their reproduction. We are in electroacoustic field recording territory here and you don’t listen to something that premiered at INA/GRM and received first prize at the 2012 Quartz Radio France International competition on a boombox you bought at a car boot sale. We’re dealing in serious head music here friends.

So I do my best by donning headphones and turing up the volume. Shutting off all outside interference for total immersion I submerge into Otondo’s world and ‘Irama’. Irama being ‘the general meaning of time interval between two successive sounds or actions’ as perceived in Javanese gamelan. So what we have is a rhythmic piece that ebbs and flows at once a huge low bass gong that drones out to be met by the purest solitary struck note you ever heard. A single ringing chime that resonates so deeply and clearly, so piercingly that it seems to penetrate the very deepest recesses of your skull. Tiny scatters and flurries of notes merge to almost silence creating an air of tension thats kept in place by the reappearance of tappings that sound like thin porcelain cups being struck.

Inspiration for the second track ‘Teocalli’ comes from the Argentinian writer Julio Cortázar and his story of a man who finds himself in hospital dreaming that he’s on the run from the Aztecs. Street drumming from Mexico mixes with samples of interviews with Zapoteco indians, monks plainsong and human whistles all devised as a parallel running of the dreamer and the modern Mexico. Its also Otondo’s noisiest work here where the drumming becomes warped into howling jet blasts of eruption that give way to the gentlest plain song and then, by way of respite, a child’s squeal of delight.

Third track ‘Ciguri’, inspired by the writings of Antonin Artaud contains perhaps the most startling and ear popping sounds on the whole release. Centered around a peyote ritual that fascinated Artaud ‘Ciguri’ becomes an enveloping field of tintinnabulation aided by a deep drone and a piercing high end hertz tone that pierces your hearing like a hot needle. Originally developed from part of a music and dance piece that showed at the Edinburgh fringe this piece was actually played at the 2011 Huddersfield International Computer Music Association where the state of the art reproduction facilities caused some audience members serious discomfort. Played in Huddersfield, premiered in Leeds and I missed em both. Unhappy face.

‘Sarnath’ uses field recordings gathered at Buddhist pilgrimage sites in India. Bells, gongs, drums, birdsong, chatter, chanting, prayer. Ortondo phases the bells and gongs until they sound like an earthquake in a grandfather clock factory each time allowing the eruption to diminish leaving gentle Harry Partch type rhythms to sit alongside exotic birds and the sound of Buddhist marching bands blowing their Indian trumpets into a squeals of adoration.

Felipe Ortondo is a Chilean who, like most internationals composers lives a peripatetic lifestyle. Having worked in Denmark he now finds himself in England and Lancaster via a stint in York. He’s won numerous international awards for his work and has performed [and had his work played] in numerous countries. He’s written extensively on the nature of electroacousitc music, has been involved in dance and theatre, sound instillation and has worked on Radio 4 dramas. In his spare time he even finds time to paint. He’s a sense of humour too, if you get chance have a listen to his seven minute tribute to Frank Zappa


And yes he does have a soundcloud page but I think he’d prefer it if you went along to one of his performances and experienced his work in real time, failing that you could always buy Tutuguri.

Comes in an origami like fold out sleeve which I’ve never seen before and an informative booklet. A remarkable release that demands a much wider audience.