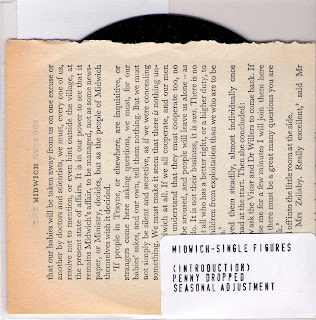 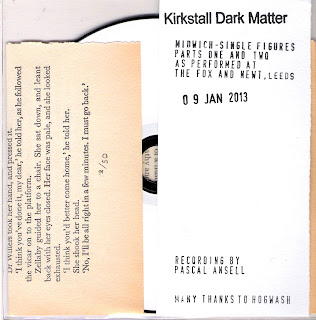 I felt tortured by having to pass the Wharf Chambers on Saturday night knowing that my chances of going in for a drink were about as slim as the bus ticket that I had in my pocket. Somebody was either playing or soundchecking and there were people stood around clutching glasses and bottles, a warm and welcoming light beckoned me in from the cold cobbled street, but it was all to no avail for I had a previous engagement the extraction from which would result in a fissure of my personal relations that I fear would become permanent.

There’s a gig at the WC on the 22nd of June and I expect you all to be there. Its being organised by Dan Thomas of Sheepscar Light Industrial and its billed as ‘The Compass Points North’. A mouth watering night lays ahead. All the young dudes [and one older one] will be playing: Aqua Dentata, BBBlood, Hagman, Midwich, Petals and These Feathers Have Plumes. A night of contemplative drone and microscopic pops and crackles eked from tin cups, thigh bones and the odd synth.

The 22nd of June also happens to be as near to my birthday as bugger it is to swearing so I’ll see you all there. Mines a small glass of well chilled Manzanilla please.

Having seen the other half of Hagman climb the parabola with his Sheepscar Light Industrial label Dave Thomas has decided the time is right to enter the fray with a repost of his own. Coming in from the other end of Leeds his Kirkstall Dark Matter label is but one release old but what better way to start than with that Leeds stalwart Rob Hayler and his well loved Midwich project.

‘Single Figures’ captures that essential Leeds cog Rob Hayler in jolly banter mode as he introduces two tracks he played recently at that other well know Leeds venue the Fox & Newt. In typical light hearted Yorkshire banter style the first thing you hear is Phil Todd demanding his money back followed by a jovial ‘gerrof’. There follows two tracks, the first of which [‘Penny Dropped’] finds Hayler expanding on the sound he found so pleasing in his kitchen one day; that of a cake tin lid rocking on a hard surface whilst slowly coming to rest. On ‘Seasonal Adjustment’ the passing traffic of Chapeltown Road becomes the accompaniment, with both, Hayler augments with the barest of cycling synth notes that bring with them that dream-like head lightening drone experience. Hayler admits to liking it loud and warns his audience that it could become uncomfortable but I didn’t hear any doors banging. Not that anybody would have to suffer for long seeing as how most Midiwch sets are done and dusted in around twenty minutes, as is the case here. A pity we’ll have to wait until June to see him tread the boards next. I’ll be down the front genuflecting away with the rest of them. Comes wrapped in pages from John Wyndham’s novel the Midwich Cuckoo in which the pages have been cleverly utilised to mark down the number of the release and in which the the words ‘the’ and ‘cuckoo’ have been erased leaving the word well you know… clever stuff. I dare say these have all gone but a good start from KDM and a label to watch out for.


Meanwhile back in Sheepscar Dan Thomas keeps things ticking over with another three of his SLI releases. Pick of the bunch this time around is London based Phil Julian whose ‘Hive Work’ shifts through various gears via a flapping mid era Whitehouse blow out to tiny fizz, rapid Gieger counter clicks and a vibrating hum thats the celestial OM vibrating at a degree guaranteed to set lightbulbs swinging. Maybe there were bees at work here too. Julian is like a steady hand on the tiller. You know you are in capable hands and this twenty minute snatch of his work is just about damned near perfect.

Astral Social Club keeps up the racket quota with a track thats built around the Charles Ives theory that if one orchestra wont work then use another one in, and make ‘em play something different. ‘Squeegee Anthem  #1’ has at least three tracks going on at once including a backbeat nicked from Hawkwind’s SIlver Machine and two separate Koassolater lines each doing their best to out spazz the other, one going forward, the other backward with a little shimmy from left to right for good measure. Somewhere within this maelstrom an electric guitar has its neck wrung so that the whole shebang comes at you like five DAB's tuned into Funtastic Radio 1 going full blare. A fine example of how Neil Campbell manages to keep ASC going forward without repetition, deviation or hesitation.

One of the most prolific artists experimenting in murk of late is Sindre Bjerga. I’ve a couple of his things here awaiting the pen but I’m finding it hard to be enthusiastic. Judging from these two tracks we can assume that Bjerga likes to wander around Eraserhead like landscapes reeling off cassette tape as decorations for the dead. This is some of the darkest tape manipulation I’ve ever heard: miserable, dank, fetid and claustrophobic. I actually think Bjerga achieves something here, in that he’s produced something interesting but which I personally wouldn’t like to listen to more than a couple of times in case I found myself gong for the knife drawer.


And whilst I was thinking all this shit up this came through the door:

Knurr & Spell - Being Psychedelic Sounds From Yorkshire.
Memoirs of an Aesthete. MOA CD 004.


Knurr & Spell being that game peculiar to Yorkshire [and now largely forgotten] in which groups of men donned clogs and flat caps and took to the moors to belt a tiny pot ball as far as they cold with long sticks. Apart from reminding me of the game, Knurr & Spell features four tracks from Shembod, Ocelocelot, Moral Holiday and Foldhead but its only just got here and I haven’t listened to it properly yet so you’ll all just have to wait. Oh and there’s pictures of rhubarb and tripe on the CD too. Smashing.

Enjoyed, not only here, but around the world...

As always, thanks for the lovely words, Mark. See you in June, if not before...