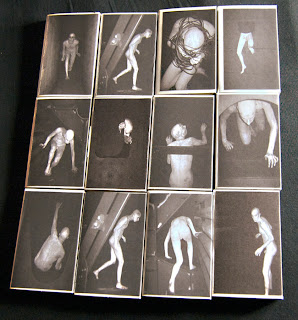 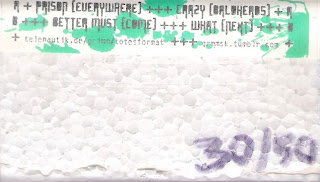 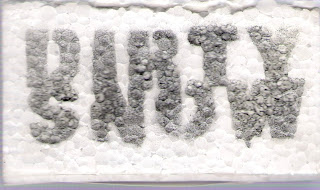 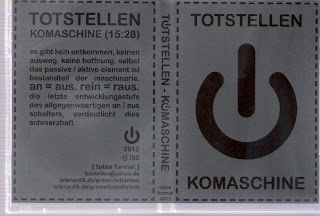 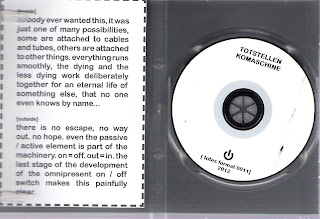 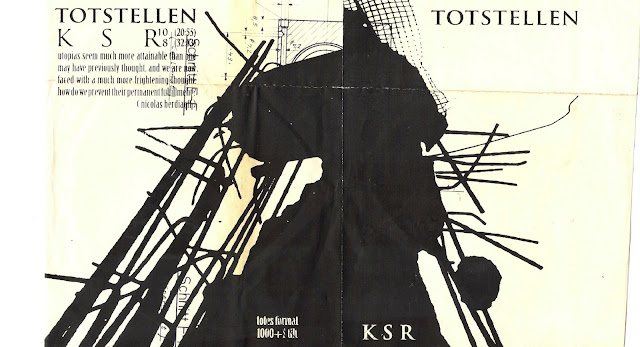 
Collapsing old buildings feature in a rare outing for the video format courtesy of German based artist Totstellen. A ten minute film of various mechanical dinosaur beasts tearing apart steel reinforcement and crumbling concrete in a way that's weirdly compelling. Not auto destructive art but architectural destructive art, a 60’s tower block in Hamburg that was the last squat in the city, the images and sounds of it being slowly brought to ground via hydraulic jaws and pneumatic drills as captured by Totstellen in a bid to try and make sense of why his former home was being flattened in the name of capitalism. Some sounds are manipulated, some looped, some processed, some added to but when its raw it works best.

Working with primitive and borrowed equipment Totstellen wandered the place alone in the days before its end mixing the sounds he found there with the ones from the actual demolition; hence plenty of sawing metal, pounding drills, donkey engines puttering, the crunch of glass underfoot and at its heart stillness and the shrill squeal thats feedback teetering on the edge of rupture. Fifty minutes worth of field recordings that I feel are only slightly marred by a slightly overzealous wish to introduce industrial noise elements during the first track ’10’ [the second track being ‘8’]. Still, there’s plenty to admire here, not least the sleeve which is a rough cut from a buildings blueprint which has been overprinted with a stark image of steel reinforcing. More Einstürzenden Altbauten than neubauten really. Think TNB symphony or musique concrete meets concrete.

Totstellen is the peripatetic sound artist who when he isn’t railing against the system turns up as GRMMSK who plunders dub reggae which he listens to whilst riding around Helsinki on the bus network but its under the Totstellen moniker that his best work is to be found.

On Live @ Wendel Totstellen manipulates sounds he recorded under [and inside] a motorway bridge going over the Elbe whilst playing a homemade stringed instrument with a drill. Not only does it sound good but the images accompanying it are remarkable too; a gaunt baldheaded chap, knacker bare, covered in white paint wandering around Ballardian landscapes like a cross between Blixa Bargeld and Nosferatu. This is all part of a video installation complete with the monotonous roar of traffic, clanging riveted substructure and a processed drilling sound that's the roadside equivalent of facing a dentists drill. Its a creepy listen which compliments the artwork no end. But perhaps the most remarkable release of them all is Komamachine. Sampling dialogue and music from the Quay Brothers film ‘Institute Benjaminata’ this is a chilling and eerie ride into queasy dark ambient territory courtesy of some fine moaning from manacled lost souls and the creaking of leather straps [I’ve not seen the film but I intend to, anything that gets compared to Eraserhead goes down on the to do pile round here] chuck in some sorrowful viola, throbbing industrialania and you have something that would bare comparison to Gavin Bryars ‘Sinking of the Titanic’ writ large on a screen of David Lynchian making.

Having watched the Tunnel/Brucke video on the Totstellen website I urge you to do the same. This is urban exploring with a wider remit. This is trying to make sense of your urban surroundings through sound and imagery.

The Live @ Wendel has 12 different covers, Dirty Snow comes wrapped in a Styrofoam sleeve, stick in the blueprint sleeve on KSR and you have somebody whose really thinking about what they’re doing in the packaging stakes whilst tackling some big themes at the same time.