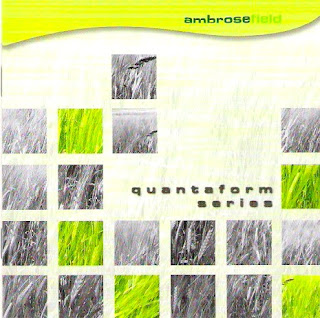 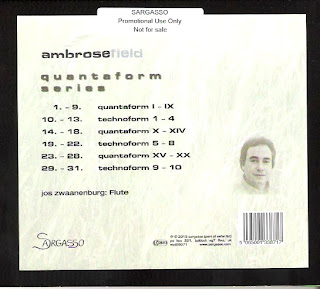 
Ah yes, the flute. An instrument of torture. Unless of course its in the hands of someone who knows what they’re doing. Having been forced to listen to Jethro Tull as a teenager I’ve had an aversion to the instrument and just when I thought I couldn’t take no more the world of light classical gave us James Bloody Galway.

All is not bad though. Having discovered Hariprasad Chaurasia, the famed Indian classical flautist, who’s traditional raga’s are some of the nearest thing to aural relaxation a man can get, I will quite happily spend a relaxing summers evening listening to his sublime playing whilst drifting in and out of consciousness, my head resting on a bejeweled bolster as a loyal punkawallah brings me a mint julep.

So I was intrigued to see how Jos Zwaanenburg would tackle award winning contemporary composer Ambrose Field's flute compositions. Divided into two different sections each deals with the flute in a different way; the ‘Quantaform’ sections are where you hear the actual flute whereas the ‘Technoform’ sections are where you hear the ‘electronic ambient interludes where the flute is absent and only its echo “its acoustic after image” remains’. Needless to say, it was these ‘Technoform’ pieces that I found the most intriguing.

This is to take nothing at all away from Zwaanenburg’s skillful flute playing. The pieces are meant to be technically challenging. I’m no expert on the instrument but you don’t need to be to realise that what you are hearing isn’t Ian Anderson stood on one leg or James Galway going through ‘Annie’s Song’ for the umpteenth time. The way Zwaanenburg stresses certain notes and pitch bends others is certainly impressive, as are the way the acoustics contrast during each set of 'Quantaform's’. Ambrose’s idea was to compose each piece for the acoustic space he had in mind, working backwards by analyzing the acoustics of each space and then composing the piece for it.

Its the ‘Technoform’s’ that prove to be the more interesting part of the project though. Especially during the middle section [5-8] where Field manipulates the echo of half caught breaths and Zwaanenburg’s feathery cycling notes turning them into flighty ethereal drones. ‘Technoform 9’ produces an ominous industrial drone, ‘10’ an electro-acoustic composition, ’11’ you could call glitch electronica.

I recommend headphones and a healthy twist on the volume dial too for there is plenty of detail in here. Whether you can overcome your flute aversion is another thing but I’m glad I overcame mine.