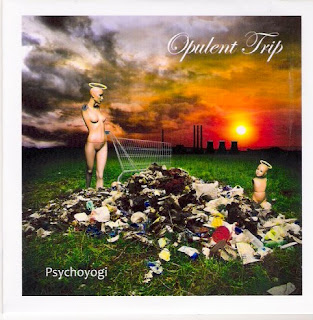 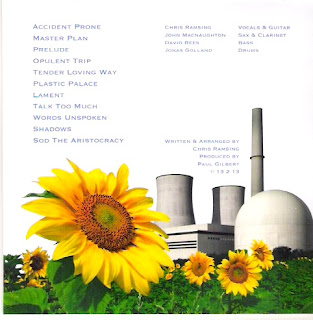 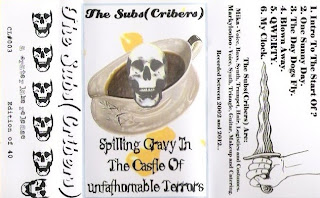 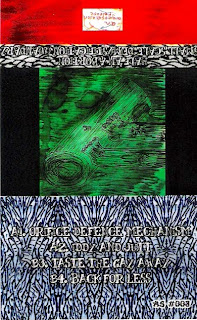 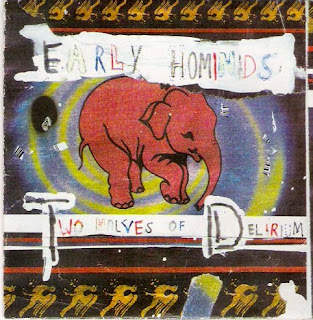 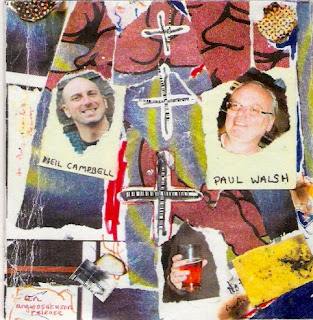 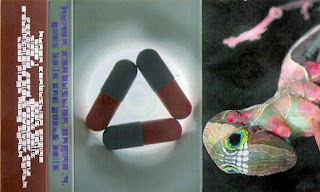 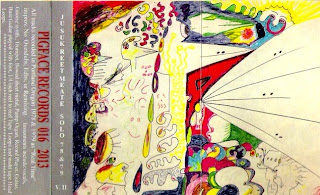 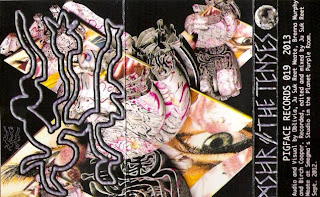 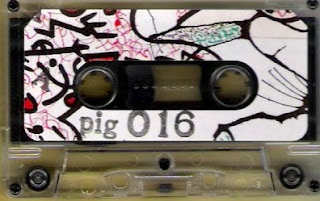 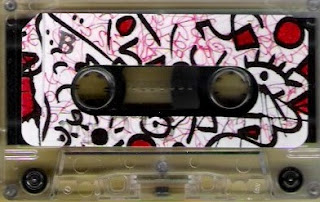 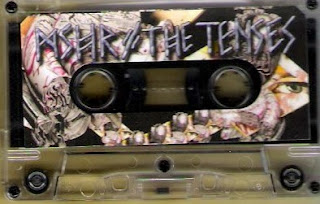 
My doctor told me to stop letting the review pile approach insurmountable levels and to get on with it. After all, he reasoned, some of the stuff you get sent probably only gets listened to the once anyway and seeing as how you’re so far behind with the review pile most of what you’re reviewing has long since been sold out or given up for dead or forgotten about anyway. Its not like the world’s hanging on your every word either is it? And besides, the people who send you this stuff want an opinion within oh ... six months at least, and most important of all want the world to know that the thing actually exists. I mean some of these people had gigs to promote that were tied in to the release you were sent and that was like months ago.

As with Psychoyogi. Who despite being a mouthful had a gig in June to promote Opulent Trip. Psychoyogi sound like they like to listen to lots of quirky English 60’s band like Giles, Giles and Fripp whose angular jazz like leanings and oh so English tales of funny people they delivery with great accuracy. I also detect Bonzo Dog Doo-Dah Band and Soft Machine. The ghost of Kevin Ayers looms large. Singer/guitarist Chris Ramsing holds the thing together with a guitar thats a bright thing with many quick changing chords on it that runs to tinkly solos as the bass plucks out back notes. His voice resembles that of a 1920’s crooner meets Viv Stanshall singing into a lozenged shape microphone. Short instrumentals of the kind heard during afternoon spa recitals are sprinkled throughout but the actual songs are the stand outs. These guys can really play too as evinced in ‘Shadows’ with its breathy delivery and Zappa like sharp turns in the chord department. I found myself curiously drawn to their work but only because I do like the likes of Giles, Giles and Fripp and Soft Machine and some of Zappa’s more quirky output. If those names don’t mean anything to you then you may find their output totally alien but I do recommend you at least give them a go, but not before putting on your smoking jacket on first of course.

Also finding their inspiration in the past are The Subs[Cribers]. A sometime synth duo out of Stoke comprising of Markylooloo [Marky Loo Loo? Looloo? and Mika [Jarvis I think]. Six songs that sound like rough demos from an early 80’s Human League or a chipset Kraftwerk covers band trying to do Depeche Mode numbers. Which is no bad thing of course. It all works thanks to the harmony created by Marky Looloo’s half spoken/sung Midlands tones and Mika’s matching sing song singing voice. I see them both sat on the floor of a living room in Burslem, crossed legged, picking out their favourite preset rhythms and drum sounds from a cheap Casio keyboard before writing the words on the fly. A favourite track would be hard to pick but I did like ‘Blown Away’ and its line ‘Will I ever learn to fly’. The songs are so short and happy you can forgive them the worst sleeve of the years and the terrible band name. Impossible not to like and destined for cult status.

The Subs[Cribers] appear on Pete Cann’s Crater Lake label whilst Pete Cann himself [under his still annoying everyone but I’m not changing it anyway ‘Half An Abortion’ moniker] appears on current Loiner Pascal Ansell’s Angurosakuson label. Stuff happens in Leeds and people need to know about it. Whether they’ll want to hear Pete’s junk noise more than once though is a moot point. The kindest thing I can say about Half An Abortion’s ‘Small Scale Demystification Quandary’ is that some of it almost sounds like TNB scrape. Pete likes to smash things up and when he does the results are usually pretty good but when he introduces masses of feedback over the top of it I find myself wondering if his quality control monitor is on the blink. The quieter moments on here are thus the more revealing ones.

Further Angurosakuson noise abuse comes courtesy of those Belgian ale connoisseurs Early Hominids. The pink elephant being what you see after listening to this at dangerous volumes whilst consuming the two halves of requisite numbers of Delerium’s that is all it takes to render speech, thought and coordination muddled. The conjoining of Neil Campbell’s Astral Social Club mutant beats and Paul Walsh’s Foldhead noises produces a delightful mixture of ear assault where the noise bleats crumple under the sheer weight of synaptic rupture of psychedelic noise. Nine tracks and 45 minutes worth, the highlight for me being track four which sounds like a disco being destroyed by an army of invading DJ’s all playing Merzbow’s Pulse Demon in unison on Technics coffins that they push into the venue on hospital trolleys. A mighty sound for sure. And again all Leeds based.

More Leeds based merriment comes courtesy of Human Combustion Engine. Yet another project courtesy of the Todd/Delaney hit factory. I saw Mel play an HCE set on her own in Todmorden the other week where the acoustics of the church the gig was held in did those eerie, spacey sounds a world of good. A total Moog synth experience if my decoding of the fools fonts on the sleeve is anything to go by and one that benefits from being all wonky on one side and more ambient on the other. If, like me, you have a few Tomita albums tucked away that you don’t tell anybody about, or have a hankering to dig out a Tangerine Dream album now and again, purely those early ones [not the first one obvs as that is neither meditative or electronic] that are all echoey and transcendental then this may be the one for you. This is more your thinking mans synth blather though with one strand hovering in the background going all wobbly whilst in the foreground the Millennium Falcon ticks over warming its engines up. Not one to confuse with Ten Pints Too Many or any other of those so called ‘vintage synth lovers society’  ‘bands’ that emerged in the wake of the Emeralds debacle but pure weird synth burble. A directionless wander in the greatest possible sense.

The Pigface label isn’t from Leeds, as any self respecting fan of ‘underground music’ should really know. The label started by Smegma member Ju Suk Reete Meate over thirty years ago has resurfaced mainly due to the resurgent interest shown in cassette only labels. Late 70’s and early 80’s Pigface records are now highly sought after items -  a measure of the importance with which they are now held. These guys were making crazy sounds when the rest of us were happy with what was left of the Sex Pistol making records with seedy bank robbers. Five cassettes have appeared over the last couple of years with two being handed over to 40’s jazzbo drummer turned Smegma collaborator Lee Rockey and the other from Tenses - another Smegma offshoot featuring Meate and Oblivia - who also appear here sharing a release with MSHR who, I discover, are a duo making noises with synths of their own making. The MSHR/Tenses is a collaboration between the two and as you’d expect its a constantly changing scenery of parps, synth stabs, spoken word LP samples and general all round buggering about in the name of jamming improv. Apart from an instance where someone goes a bit mad with a gong I found it all to be in the finest Pigface tradition. Think bells, toys, things that are shaken, rattled, banged, bonged, dropped, kicked, bashed and blown, plucked, prodded, patted, poured and popped, clanged, cut, creaked and coddled into a myriad juxtaposition of sounds.

The Ju Suk Reete Meates solo stuff is a different bag altogether with one side showcasing his solo guitar work and the other a session in front of a pump organ. There’s other instruments involved too including a bass guitar played by foot and some reel to reel tape loops but the main instruments ring loud. I’ve heard some of Meate’s solo guitar stuff before via the De Stijl’s reissue of his other 78/79 guitar solo work and this is a fine accompaniment to have. The guitar is loud and freakish, squealing along to the singing of bowed sheet metal. The loops appear like snoring insects, the records are stuck in forced grooves emitting remnants of 50’s rock and roll bands, the trumpet it doth parp and the guitar [electric au natural] a frantic spazzed thing, twanged hither and thither, scratched and slowly scraped down the length of one string bringing forth a joyous hum from the speaker. The pump organ pieces are the best work I’ve heard from Meate, not a Nitsch blast but a considerable presence all the same with a powerful drone emerging that comes at you like a twisted horror flick soundtrack played by a demented Dr. Mabuse. Through it all you can hear the squeak of the pump being pumped, in other hands an irritant but here most welcome and redolent of a quirky NWW Sucked Orange track. Not something you hear in church everyday.

To be thrust into the Smegma/Pigface spectrum once more makes me realise how boring a lot of other so called improv/experimental music is.