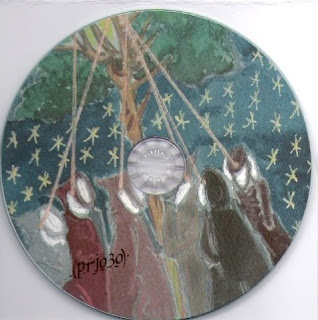 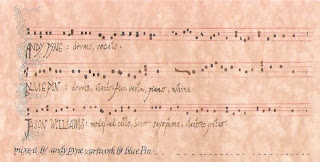 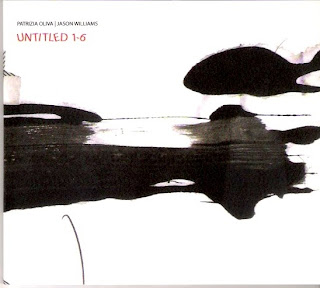 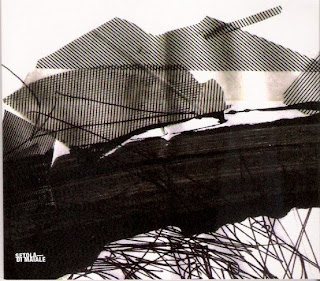 What fun, what jolly japes. An hour or so of Brighton improv and some Italian noise with an Eastbourne filling thats the common link courtesy of Jason [to give him his full name] Williams. Or as I call him the six foot nine inch length of peripatetic noise thats more likely as not to be found on a bus or a train or cramped uncomfortably in the back of a car trailing halfway across the country on the off chance of deafening a few people in a room above a pub.

He’s been ‘at it’ for as long as I’ve been writing this drivel but never have I seen anything appear with his given name on it before now. I suspect a maturing, a growing of sensibilities, a chance to put his name to something. Literarily.

Having abused guitars and noise boxes for years it seems only natural that he should bring these forms to his involvement with Brighton improv duo The Black Neck Band of the Common Loon who when not grubbing around in Hectors House and various other houses of Brighton ill repute are chilling with Unky Thurst and doing their best to keep improv alive in the land of salad and cock rings.

Having just soaked up a few bars of improv courtesy of some Smegma offshoots in the last review it seems appropriate to pluck their 'The Fleshing Beam' from the pile. Where we find Andy Pyne playing drums and vocals and the curiously named Blue Pin playing electrified violin, piano and ‘whine’ as well as even more drums. They take on collaborators now and again, mainly as ballast I assume, this time with the aforementioned Jason Williams as just down the road accomplice. To it all Jase throws in modified cello, tenor sax and of course, electric guitar.

And it works a treat. Over eight tracks and fifty minutes worth with the moods swinging from all out thrash to Pharoah Sanders fluttery flute solos to sparse drum rattle and tinkly piano. Strings are tugged and frotted, when the vocals appear they’re buried deep in the mix so that they emerge sounding like Native American chants except that the Indians have had too much fire water and things have gone all sloppy. All this on ‘Static Pleasure’. Breathy flute like wheezes are forced gently down the neck of a sax and are joined by scattered drum rim shots and a forbidding sounding church organ that mutates into a moaning vocal drone. Beats or rhythms that are more like slightly speeded up funeral marches or quick march Eraserhead themes are slathered with wild cello [Force Feeding The Flock]. On one track theres some kind of garbled language that sounds like a Turkish stall holder shouting his wares or a call to arms by an overzealous Iraqi or is this a Lightning Bolt cover all played out to massed spazzed out drumming and masses of guitar abuse. If anything our Mr. Williams bosses things a little, I guess he can’t help himself, not that the rest would have complained seeing as how the results are so effective


The collaboration with the Italian vocal improvisor Patrizia Oliva on the other hand harks back to Williams earlier days as noise provocateur when making a racket was all that counted and bugger the aftermath. After what turns out to be probably the worst first track of a release I’ve ever heard, anywhere, by anybody here now and in all likelihood, the future too there does appear to be something of worth lurking within but bugger me if it didn’t labour in revealing itself.

Oliva’s voice is a gentle thing, a child singing nursery rhymes or a dreamy Japanese schoolgirl absentmindedly moaning the lines of a J-Pop song whilst staring out of the school window. An ethereal presence that when left alone is a very strange thing to listen to indeed but when slathered in Williams own brand no-fi noise gubbins becomes a so far out there what-the-fuck moment you have to wonder whether this was all one big joke on the Wire magazine or a genuine attempt to reconfigure whatever clash of genres this actually is. Oliva’s vocal moments are few and far between alas. I’d have liked to have heard more but when calm does descend, to a level of barely heard buzzes and shuffling, we’re left with too much of Williams glitch dub noise and too little of Oliva. A curious release and one that's had me baffled for quite a while now. I’m either so far off the pace these days I don’t even know my own arse or this is the new dogs bollocks. Someone else decide for me please.

Seto Di Maiale
Posted by Idwal Fisher at 11:01 am