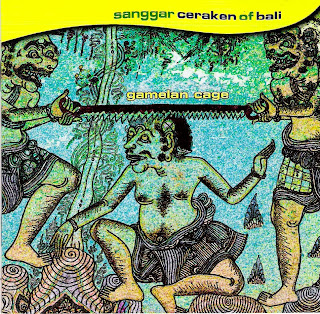 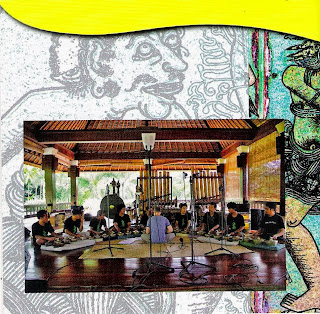 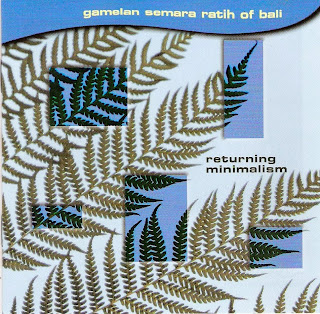 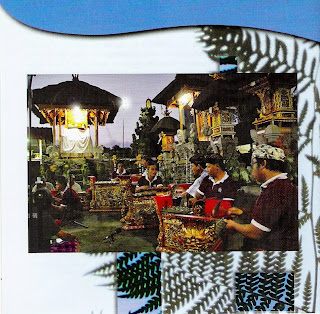 
The man behind the concept that links these two releases is the magnificently named John Noise Manis [no doubt a nom de guerre but still a good one]. It was his idea to see what contemporary American compositions sounded like when performed by gamelan orchestras. Thanks to the highly detailed and studious sleevenotes on both these releases I now know that the biggest obstacle facing  anyone trying to teach a gamelan orchestra how to play works of a western nature is that gamelan players follow no musical notation, let alone a western one. There does exist a notation system for gamelan but this is used mainly to archive works and isn't used for performances, tradition dictates that gamelan orchestras rely on an oral tradition and the skill and memory of the player to continue the tradition [I include this information to keep pedants from my door]. The artistic director of Gamelan Cage, Andrew Clay McGraw, overcomes this problem by teaching the players himself but then leaves them to develop each piece only to find that they have, to the horror of Cage purists, improvised. I’m no Cage purist though and although I’m familiar with some of the pieces here I found that the spontaneously added shouts towards the end of ‘Primitive’ only heightened my overall, zoned out enjoyment.

McGraw interprets Cage’s prepared piano notes by [in some instance anyway] laying coins and bells on top of keys and gongs going so far as to cover upright drums in cloth bags whilst nailing tiny cymbals to wooden mallets. Cage’s notes for his prepared piano compositions were, in some instances, less than exact thus giving McGraw more freedom to work in. He also wonders as to whether Cage’s approach to prepared piano was influenced by gamelan itself while studying under Cowell - a posit that still remains unresolved. As it is, Cage himself composed only one piece for gamelan, the haunting Haikai, and that late in his career. Its not included here and I suspect its because a direct translation, gamelan to gamelan, would’ve sounded more like a cover version or a tribute adding little or nothing to project itself.

What you do get is nine of Cage’s prepare piano compositions all given the gamelan treatment. To compliment the languid ‘Prelude for Meditation’  there’s an austere version of ‘Music For Duchamp’ and a take on ‘Mysterious Adventure’ that lifts the original from its stark depths revealing it as the jiving, driving, floor filler that it really is. This alone makes the project worthwhile but there are other highlights too including the rampant opener Bacchanale in which Cage’s first foray into prepared piano composition is given some rousing and energetic treatment  [see video above for confirmation].

‘Returning Minimalism’ sees Terry Riley’s ‘In C’ used as a working model for  further exploration and improvisation. Using 23 musicians [au natural] these two 25 minute tracks evolve through many states of tempo and mood closing a circle that began with Riley’s own influence through gamelan. Its a neat circle to square.

Billed as ‘Artistic Coordinator’, Ken Worthy, again with many detailed booklet notes, describes the process and the build up to the recording process, involving as it does reliance on the weather and the blessings of priests. Then there’s his realization that these recordings may be even more radical than Riley’s 60’s composition seeing as how these musicians are having to grapple with a structure that, even though it may create a sound similar to ‘In C’, is in fact far removed from it.

Its the interplay of overlapping instruments and the freedom of expression that bring these two works to life. ‘In Deung’ is the more contemplative of the two pieces, ‘In Dang’ a more explosive piece thanks to the use of heavy wooden mallets and vocal shouts [designed to scare away malevolent spirits] but both contain passages of tranquil beauty, quiet moments of flute and gently struck keys which reveal insect chatter and through it the true nature of these outdoor recordings.

What interested me most during my time here was the sheer depth of instrumentation available to a gamelan orchestra and the myriad ways in which their instruments can be tuned and set up. No two gamelan orchestras sound alike either. Its no surprise they drew the attention of people like Debussy, Cage, Riley, Reich, Glass, La Monte Young and lets not forget the Sun City Girls. Its a list that will continue to grow and so it should.